Since 1988, S.A.L. has raised more than $6 million for The American Legion Child Welfare Foundation. S.A.L. members have volunteered over 500,000 hours at veterans hospitals and raised over $1,000,000 for VA hospitals and VA homes. The Sons also support the Citizens Flag Alliance, a coalition dedicated to protecting the U.S. flag from desecration through a constitutional amendment.

Our local Squadron of S.A.L hosts our Friday Night Cornhole Tournaments!  Check them out on Facebook. 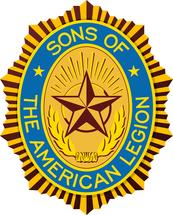